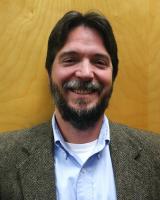 Gregory D. Peterson is Director of the National Institute for Computational Sciences, the NSF supercomputing center at The University of Tennessee, Deputy Director of the Oak Ridge National Laboratory and University of Tennessee Joint Institute for Computational Sciences, and Professor in the Electrical Engineering and Computer Science Department at The University of Tennessee in Knoxville. He received his BS, MS, and DSc in Electrical Engineering and BS and MS in Computer Science from Washington University in St. Louis. He serves as the Principal Investigator for the NSF Kraken project, that resulted in the world's first academic petaflop computer. He is also co-PI for XSEDE, the NSF's Extreme Science and Engineering Discovery Environment, for which he is director of operations.

His research focuses on parallel and distributed systems, computational science with emerging computing platforms, reconfigurable systems, performance evaluation, and verification. Prior to joining UT, he was Chief Technical Officer with FTL Systems, Inc. and has served on active duty in the Air Force at AFRL where he led systems specification and design automation R&D for AFRL/IFTA. He chaired the IEEE East Tennessee Section and the VHDL International Users’ Forum, and frequently chairs conferences or workshops. Dr. Peterson has extensive program management experience, including the direction of numerous research programs and technical committees. He has performed research in industry, government, and academia in reconfigurable computing, parallel and distributed systems, and design automation. He was awarded the U.S. Air Force Research and Development Award as the best USAF R&D engineer for 1998, for both program management achievements as well as research results.

In addition, he targets the practical employment of these technologies to enable scientific exploration via improved or accelerated computational science applications across a diverse set of domains such as biology (e.g. genomics, proteomics, systems biology), quantum chemistry, and physics.